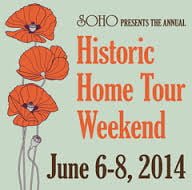 According to Uptown News, “For more than 20 years, San Diego’s Save Our Heritage Organisation (SOHO) has been making pit stops throughout the county, putting the spotlight on different neighborhoods and homes that showcase the region’s illustrious history.

This year, SOHO will focus on the North Park community for its annual historic home tour weekend.

With collaboration from the North Park Historical Society (NPHS), SOHO volunteers have a variety of events planned for this year’s tour, taking place the first weekend in June. Participants will have the opportunity to take part in an awards ceremony, walking tour and interior tour of a selection of homes.

While SOHO has delved into North Park in the past, this is the first time the organization has given the neighborhood the exclusive treatment for the tour.

“North Park is interesting in that it has many different styles of homes in one neighborhood,” said Ashley Christensen, events and outreach coordinator for SOHO.

Over the years, the format of SOHO’s annual tour has shifted. In the past, it often focused on a larger footprint while spotlighting something specific, such as an architectural style of home.

More recently, however, SOHO has been doing community-specific tours. The group in prior years led tours in such Uptown neighborhoods as Bankers Hill and Mission Hills.

NPHS Secretary Katherine Hon said she and fellow members were thrilled to learn the neighborhood was going to be featured in this year’s tour.

“We’re happy to partner with them,” Hon said. “Since we first learned they picked North Park for this year’s tour, we’ve all been pretty excited. We all have a lot of respect for SOHO and all that they stand for and do.”

Christensen said SOHO’s annual tour carries a two-pronged approach. Proceeds go toward funding the nonprofit’s programs. But the event also is an opportunity for people to marvel at the city’s rich background.

“We want to educate people about the history,” Christensen said. “But we also want to make them aware. Sometimes you don’t even know what’s in your own backyard.”

Some of the homes featured in this year’s tour are in such areas as the Dryden Historic District, a six-block neighborhood between 28th Street and Pershing Avenue, as well as Morley Field and the Streetcar Suburb on Hamilton Street.

“We hope people gain an appreciation for how historically special this area is,” Hon said. “There’s a lot that’s unique about this area.”

One of the landmarks Hon is especially proud to showcase on the tour is the Water Tower, located within the one-mile Streetcar Suburb of the Hamilton section of North Park. Last year, the Water Tower was named to the National Register of Historic Places.

“I think it’s important people take note,” Hon said. “If you don’t protect it, you lose it.”

If you are interested in participating in a tour of historic North Park homes, click here. Or if interested in becoming a home owner in the neighborhood of North Park, contact me and find out how I can help you.