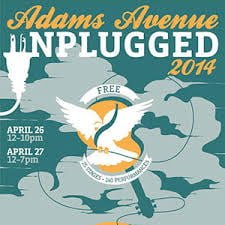 Adams Avenue Unplugged, formerly known as Adams Avenue Roots Festival, takes place this weekend, April 26th and 27th along a 2 mile stretch of Adams Avenue. Beginning in the University Heights sections of Adams Ave, going through Normal Heights and ending on the east side of Kensington, music is scheduled from 12 noon to 10pm on Saturday, and 12pm-8pm on Sunday.

The festival is FREE to the public and includes a line up of 150 live musical performances. For the entire schedule, click here. There is the option to buy reserved seating for the headliners, which include: Chris Hillman & Herb Pedersen, Peter Case, Willie Watson, and Jonny Fritz. For more info on reserved seating, click here.

Our friends at the Union Tribune had this to say about this year’s Adams Avenue Unplugged, “Former San Diegan Chris Hillman, a 1991 Rock and Roll Hall of Fame inductee as a member of The Byrds, will headline the 2014 edition of Adams Avenue Unplugged. The free, two-day festival will take place April 26 and 27.

Hillman, who grew up in North County and used to own a home in Bird Rock, is also a former member of such pioneering country-rock groups as The Flying Burrito Brothers and Manassas. He’ll perform at Adams Avenue Unplugged with longtime musical collaborator Herb Pedersen, with whom Hillman co-founded the Desert Rose Band.

The change from the Roots Festival to Adams Avenue Unplugged was made to cut expenses and help make the festival more inclusive for businesses within a nearly two-mile long footprint of Adams Avenue. A free shuttle will be provided both days for festival attendees.”