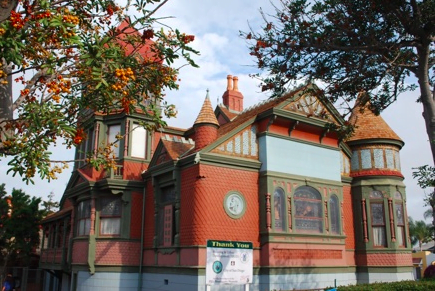 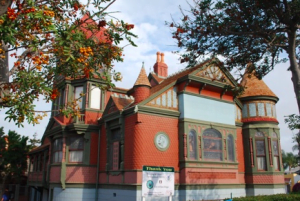 It is described as a glorious example of eclectic late 19th century Victorian/Queen Anne architecture, a crown jewel of the era which earned it a historical site standing by the city of San Diego in 1970, just in the nick of time, as it was in sad shape on the outside, really in need of renovation! Today Villa Montezuma is used as not only a historical house museum, but offers changing exhibits, is used as a community cultural center and on occasion is the setting for weddings and receptions.

Built upon a hill, it has two stories, with a partial basement with an authentic, recreated turn-of-the-century kitchen, multipurpose room and storage areas. On the south side of the mansion, one finds the tower room, complete with an Arabesque dome, which can be found via a staircase on the second floor. It was Shepard’s study as it had a magnificent, panoramic view from San Diego to Point Loma and south to Mexico, a source of inspiration for Shepard’s creative composing and writing.

Floors throughout the mansion were made of polished fir, which were covered with Turkish and Persian rugs when Jesse lived there. The bottom half of the walls are made of polished redwood and walnut, while wallpaper such as pink fleur-de-lis designs enhance the top part of the walls. Ceilings have silvery gray to white Lincrusta Walton . There are many art glass windows on the exterior walls and some are hung over several interior doorways, used as transoms. There are 5 tile-faced fireplaces throughout the mansion.

The main floor has an entry hall, a reception room, a magnificent music room which takes up the entire east side of the mansion, the red room, a drawing room, a library, a dressing room, a blue room and a dining room.

The second floor was and is used as an art gallery and museum.

The population of San Diego began to boom after the railroad was built into San Diego in 1885, swelling in population from 5,000 to 40,000! In an effort to loose its frontier town image, a push was made to bring culture and learning institutions to San Diego. Schools, universities and opera/concert halls were established. Harr Wagner, the editor of the San Francisco literary magazine and his circle of poets, painters and musicians were persuaded to leave cold, rainy San Francisco and settle in the lovely town of San Diego.

One of his artistic friends was opera singer, musician, composer and author Jesse Shepard moved into town and built his Villa Montezuma in 1887, just the way he wanted it, as he was also gifted in knowing Victorian art decorum and design. He gave his ideas to an architectural firm, Comstock & Trotche,whose gifted designer team put Shepard’s ideas to work to create this crown jewel of Victorian Architecture. Comstock & Trotche designed most of the notable homes, commercial and civic buildings which were built in San Diego big growth period in the 1880s.

After Jesse Shepard returned to live in Europe, after being eventually shunned by San Diego’s cultured community due to his activities explained below, the Via Montezuma passed through many owners throughout the years and was used as a boarding house during World War 2. While the owners did their best to upkeep the interior, the structure itself began looking kind of funky and a little rundown, in need of major renovation.

It became the property of the city of San Diego in 1970 when it was named a historic site. Since then, many dedicated people, artisans, organizations have worked together to do a variety of minor and major renovations, restoring as much as possible Jesse Shepard’s original decorum and design found in the original Villa Montezuma. Even a fire in 1986, which swept through most of the second floor, and damaging the ceiling of the first floor music room, only strengthened the collective resolve to meet and conquer the challenges presented in the restoration effort.

It’s not been reopened to the public and will be doing tours once a quarter until further notice. The next tour is scheduled for Saturday, Sept. 26th, 2015. To attend this free tour, you must register at:  www.SDRecConnect.com I had trouble finding it at first, so type in “tour” in the search box and scroll down. The tours are offered every half hour from 9:00am – 1:00pm. Afterwards, I suggest you stroll through the neighborhood of Sherman Heights and enjoy other historical homes. You can even wander towards Golden Hill if you are on the hunt for more.

If you find yourself falling in love with these old neighborhoods and want to know about the real estate market, contact me at: Carmen@GreenMeansGrow.com