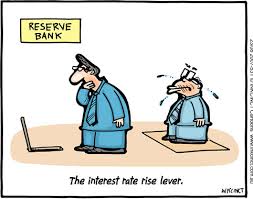 by Huggy
in Uncategorized
Comments

Why should you care about what interest rates are doing right now?  Well, in January of 2014, the Federal Reserve announced it’s decision to begin backing off on its $85 billion per month bond purchasing stimulus plan.  The monthly $85 billion expenditure was an attempt by the Federal Reserve to keep interest rates low in efforts to stimulate the housing economy, and encourage United States residents to buy homes.  The Federal Reserve did manage to keep long-term mortgage interest rates at an ‘artificial’ record low for some time.  However, as noted in my past blog post titled, “The Honeymoon Might Be Over”, the gradual pull back of the Federal Reserve’s efforts most likely means that interest rates will be increasing.  Over the past two weeks this has in fact been the case.  Mortgage giants such as Fannie Mae and Freddie Mac have themselves predicted rates to be between 5-5.4% by February of the year 2015.

At this point in time, if you are on the fence about purchasing a home this year, it is important to act fast because as interest rates rise, affordability declines.  To add some perspective, see this table below: