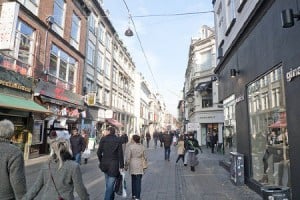 Great Article from our friends over at GOOD.com:

“The symbol of American success often involves having the biggest house possible, but our outsized fantasies seem to be shifting. According to a new survey, more than three quarters of us consider having sidewalks and places to take a walk one of our top priorities when deciding where to live. Six in 10 people also said they would sacrifice a bigger house to live in a neighborhood that featured a mix of houses, stores, and businesses within an easy walk.

For once, our preferences align with our impending reality; in the future, we may not have a choice whether or not to downsize our lifestyles. The housing bust exposed that the McMansion phenomenon is unsustainable, which has forced us to re-examine our priorities. In another study in 2010, the ideal number of square footage people desired for their houses dropped dramatically. It’s becoming increasingly clear that the American dream of buying a big old house will need to be revised for the youngest generation.

Regardless of our financial situation, living in walkable areas is just better for us. There have been numerous studies concluding that suburban and rural lifestyles are actually less healthy than cities, while New York City, the mother of all walking cities, enjoys a record-high life expectancy. Urban planners are already trying to figure out ways to design suburbs that necessitate less driving. Things that are good for us all too often require a bit of sacrifice. But in this case, our ideal and our fate are perfectly in line.”

Love it – Going Green is just as much about the why as it is the what.  We believe that through a consultative approach to all the elements of what comprise a sound buyer we can achieve the goal of not only arriving at what you want, but ridding all from the dreaded buyer’s remorse.