Case-Shiller Index of Home Prices Reports: San Diego 15 Months in a Row, In the Black

Case-Shiller Index of Home Prices Reports: San Diego 15 Months in a Row, In the Black

San Diego Home Prices are up for 15 months in a row.  The Case-Shiller home price index for San Diego was up a mild .4 percent overall in June.  Hidden in that increase, however, was a drop in the high-priced tier (composed of the most expensive one-third of homes sold during the April-through-June measurement period).

This continues the general (though recently dormant) trend in which the rebound has been far stronger in the low-priced than the high-priced tier, with the mid-priced tier splitting the difference: 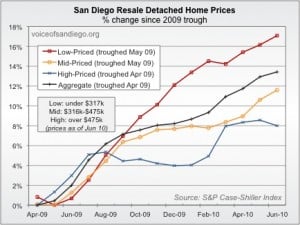 And while good news can be friendly, the data also might be telling a different story.

Our local economist, Rich Toscano, goes on to tell what could be the front of a different story:

It should be noted that these ratios combine data from many San Diego sub-markets that could be quite disparate in terms of price changes, rents, and residents’ incomes.  So this is no magic formula — the ratios simply provide a very broad-brush look at whether the San Diego market in aggregate is cheap, expensive, or somewhere in between. 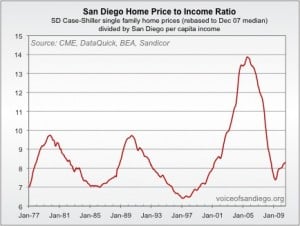 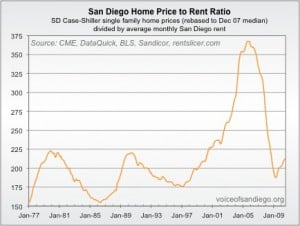 So what Rich is pointing out is something we would all be wise to watch: that is, to not make the same mistake twice.  We all want things to normalize and we’re hungry for it.  So, while bank’s lending policies allowed for folks to borrow and buy more then they could afford, lets not forget that it was our demand that asked for it.  As Mark Twain famously put it, “History might not repeat itself, but it sure does rhyme.”