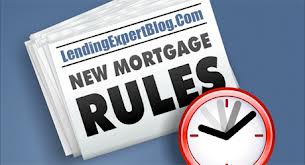 by Huggy
in How To Buy A Home, Mortgage Rates
Comments

We’ve seen a lot of financial regulation since 2010 and more is on the way.  Next up is the Qualified Mortgage which begins in January of 2014.  Like all regulation it is intended to protect consumers but could it actually hurt them?  Here’s what Forbes has to say:

The Consumer Financial Protection Bureau unveiled new home-lending standards Thursday that will define how future mortgages are originated, determining what types of loans can be offered by banks and to whom. The Ability-to-Repay and Qualified Mortgage rule focuses on two major factors: a prospective borrowers’ ability to repay a mortgage, requiring steps in the underwriting process like verifying income and assets, and what that mortgage should look like.

The newly finalized rule — the first in a series of major rules related to the industry that stem from the 2010 Dodd-Frank Act — is meant to help prevent a repeat of the lax lending that led to the economically crippling subprime mortgage crisis. The idea is to shield would-be borrowers from mortgages they can’t afford and in turn, grant lenders some protection against lawsuits by foreclosed borrowers who claim they shouldn’t have received a mortgage in the first place.

The details of the new rule had been hotly contested by politicians, consumer groups, and lenders during the drafting process. Perhaps the biggest concern voiced by the mortgage industry was that the new regulations could stifle lending activity and the nascent recovery in housing. It was legitimate cause for concern: for the past several years, credit has been exceptionally tight as banks have been loathe to lend money to anyone except the most highly qualified borrowers. A handful of studies and reports have confirmed this tight lending climate; Federal Reserve Chairman Ben Bernanke even acknowledged it recently, saying that “overly tight lending standards may now be preventing creditworthy borrowers from buying homes, thereby slowing the the revival in housing and impeding the economic recovery,” in a November speech.

Now that the details have been firmed up, it looks like the final product might actually help ease that “overly tight” lending environment — in the private loan industry at least.

“We applaud the Bureau for offering a legal safe harbor to lenders when they originate loans that meet the rigorous ‘qualified mortgage’ standards in the rule,” said Debra Still, chairman of the Mortgage Bankers Association, in a statement. “This approach should allow lenders to offer sustainable mortgage credit to a great number of qualified borrowers without having to risk unreasonable and overly punitive litigation and penalties.”

In other words, the new definition may provide the legal framework needed for private lenders to more confidently service mortgages in a post-housing bubble industry that has largely been dominated by Fannie Mae, Freddie Mac and government agencies like the Federal Housing Administration.  It’s not to say that the qualifying standards themselves will ease — these regulations actually solidify more stringent practices that have already been shaping home-lending for the past several years — but rather that lenders’ skittishness to underwrite loans to qualifying borrowers will.

The MBA’s hopeful sentiment was echoed by other housing market experts that have been critical of tight lending, as well. “The National Association of Realtors applauds the Consumer Financial Protection Bureau for creating a broadly defined Qualified Mortgage rule that establishes strong consumer protections while ensuring continued access to safe, affordable mortgage credit. NAR forged a coalition of partners that urged regulators to honor Congressional intent by crafting a broad QM and we are pleased that the rule encompasses the vast majority of the safe, high quality lending being done today,” stated Gary Thomas, president of the National Association of Realtors. “We will continue to work closely with the CFPB to ensure that the cap on fees doesn’t restrict consumers’ mortgage options, but believe today’s QM rule is a positive step to bringing certainty to the housing finance system.” Here’s what the “broadly defined” rule, which will affect mortgage options for as many as 100 million Americans, essentially entails. It creates a new standard mortgage in the U.S. called a ‘qualified mortgage.’  Exotic mortgages like interest-only loans, loans carrying balloon payments, loans where principal increases over time, and loans with terms of more than 30 years won’t be considered

‘qualified.’  Lenders won’t be able to offer deceptive teaser rates to consumers and mortgages in which fees and points cost more than 3% of the loan won’t be considered ‘qualified’ either. A prospective borrower can’t have his or her total debts equal or exceed 43% of monthly gross income, either. In return for following these criteria, a lender will receive protection from most borrower lawsuits, based on the belief that it properly assessed those borrowers’ abilities to repay their loans.

So robo-signing debacles and so-called “fraudulent foreclosures” stemming from misleading loans granted to borrowers with no proof of income that have culminated in several multi-billion dollar settlements could be a thing of the past. If the $25 billion mortgage relief plan of February 2012 is any indicator, newly defined lending rules may be just the impetus private banks need to service mortgages, adding certainty that could stimulate lending in much the same way the mortgage relief plan stimulated banks to start processing delayed foreclosure filings and embrace home loan modifications and short sales for borrowers.

Still, like other regulations, that possibility will face roadblocks. “Fannie Mae and Freddie Mac are more nit-picky about loan paperwork than the CFPB is,” counters Holden Lewis, a senior mortgage analyst at Bankrate.com. “Because Fannie and Freddie dominate the mortgage marketplace, lenders are underwriting to those persnickety Fannie/Freddie standards.” Together with the FHA, the government-sponsored enterprises guaranteed as much as 90% of all new mortgages last year. Lewis thinks the rules, therefore, will change little in the industry, particularly from the borrowers’ perspective, adding that a 3% cap on fees could even make it more difficult to get small loans since the actual cost of originating a small loan can exceed that cap.

“Here’s what will change as a result of this rule: The next time there’s a housing boom, this rule will prevent lenders from losing their heads and, in the heat of competition, relaxing lending standards too much,” he asserts.

“Ultimately, the final verdict on this rule will be made by the market. We believe the rule will effectively block the return of risky product features and inadequate documentation.   If it also provides lenders the certainty needed to originate qualified mortgages broadly across the market to creditworthy borrowers, it will have been a success,” according to Still.

It’s been quite the week for the mortgage industry. The Qualified Mortgage rule comes on the heels of two major settlements announced Monday, including a $8.5 billion settlement between 10 mortgage lenders and federal regulators that ends reviews of so-called “fraudulent” foreclosures, in favor of cash payments and loan modifications to eligible borrowers. The other, a $10.3 billion settlement involving Bank of America and Fannie Mae, puts to rest representations and warranties claims harking back to the loosened lending standards of the housing bubble.